The Students’ Take: How Cresskill’s Own View the Passage of the Recent Referendum 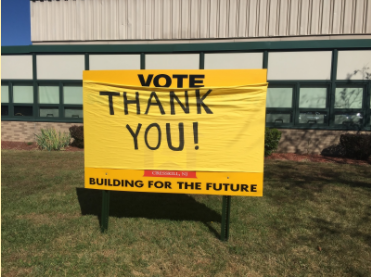 On September 27th, the Cresskill High School Media Center, otherwise known as the Interim Office of the Board of Education, was closed during High School Lunch for unspecified reasons. Some speculated it was because there was no teacher to supervise. Others, with perhaps more of a basis, said the Board was celebrating.

That is, celebrating the passage of the referendum that has enabled them to begin work on a $12.5 million preschool and kindergarten addition to Edward H. Bryan School. The Board of Education took to their Twitter page the following day to report their victory: “REFERENDUM PASSES!! 732-518! THANK YOU CRESSKILL COMMUNITY! #CresskillPride”

Given that the referendum passed by a nearly 200 vote margin, it was met with enough appeal to pass among parents. But what is far more interesting is the way students, who neither own homes nor are responsible for paying for this addition, reacted to it.

Max Wilson, a junior at CHS who has spent his entire educational career in Cresskill, applauded the addition, as he firmly believed the district does a “good job running its institutions.” But not all students shared a similar viewpoint. One of Wilson’s classmates who has also spent much of his academic career in Cresskill, Ryan Distell, was more cautious in his judgement, saying the referendum is “very expensive, but it’s necessary” to address issues with overflow in the school district.

But perhaps the most intriguing opinion came from another junior, who requested anonymity, that did not attend Bryan School. This student is not an American citizen, as she immigrated with her parents to America from Korea when she was young. She did not see the referendum as good or bad; she saw it as unfair. Since her parents are not citizens, they are unable to vote in the referendum, yet are still required to pay any accompanying taxes that come with the referendum’s approval. The Census Bureau, as reported by DataUSA, recorded that 87.9% of Cresskill’s population were American citizens, which falls below the national average of 93%.

While the referendum passing is certainly a big step in the right direction, the Board of Education has much work to do, including the demolition of two houses next to the school and the subsequent construction of the new center. They aim to be finished by September 2019.