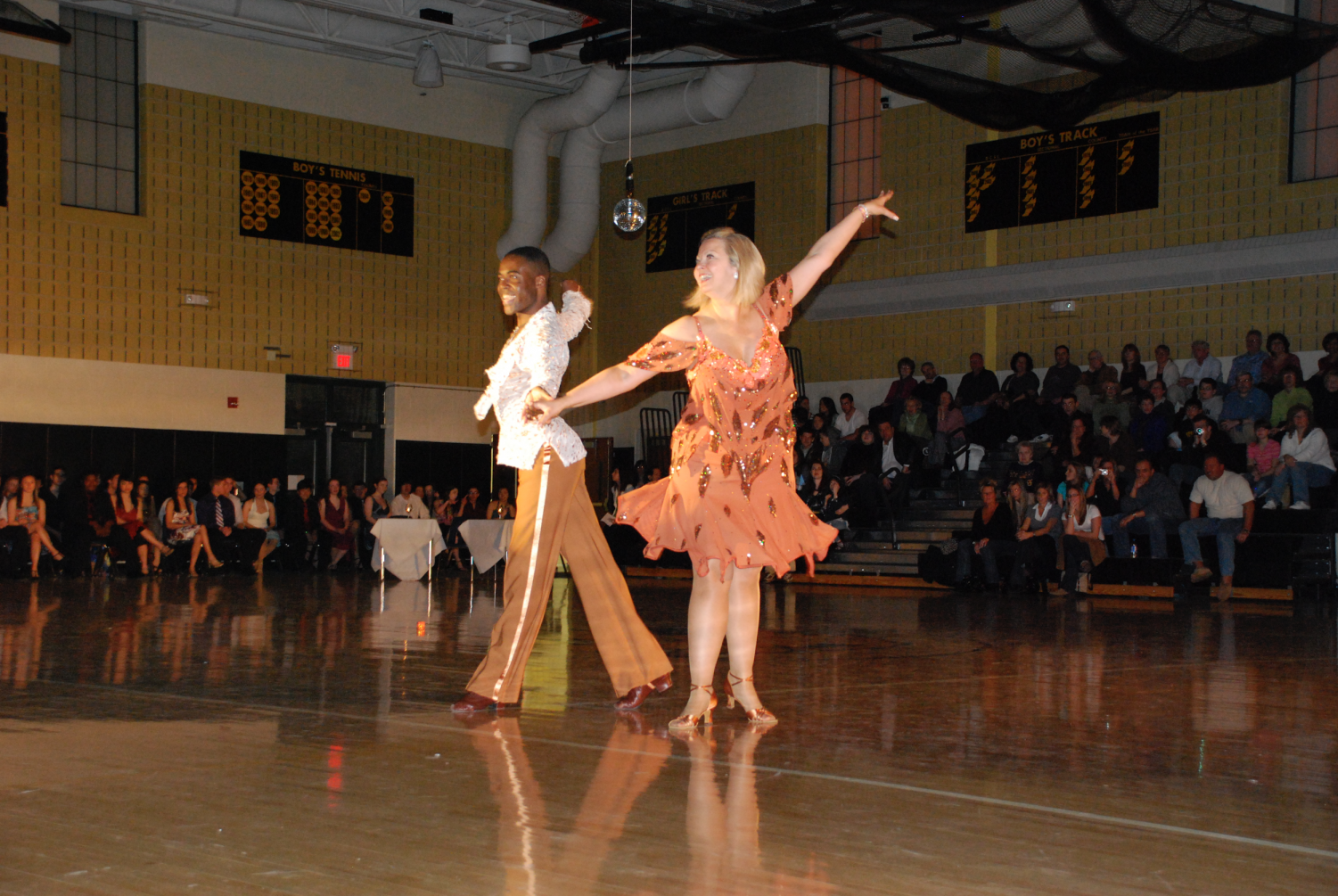 Dancing with the Stars—and the Supernova behind it

In the little back room of Cresskill High School’s gymnasium, great rolls of vinyl line the walls – thick slabs of black and blue. There is the faint old scent of sweat that hangs in the musty air. By evening this is indeed a wrestling room, but by day, when the sun still filters softly in through the wide windows and some twenty students, their feet swift and nimble on the floorboards, grace the space, it is, more than anything, a ballroom.

“Rotate!” Ms. Muller calls out periodically, and the couples drop their hands. Their feet, though, by some unconscious choice, continue to groove, holding onto a remnant of rhythm.

“Do you know why I have you rotate?” Ms. Muller asks.

The class turns to her with eager eyes.

Her warning – though it elicits some embarrassment from students – is not at all far-fetched, for the music is so often dreamy, romantic, mesmerizing – evocative of a bygone era. It emanates from a little silver radio that Ms. Muller commands from the front of the room, equipped with a stack of well-worn CDs.

And everyone seems to smile when a certain waltz comes on. The tinkling melody, the soaring string accompaniment, Elvis’s luxurious Southern drawl. It is in such moments, which go as quickly as they come, that one can’t help but be whisked away to daydreaming of an unlived past: those funky rhythms which were, surely, the contemporary pop for a long-graduated class of students; those chunky sneakers which pattered gently upon the same floor, some ten, twelve years ago.

In May 2007, as New Jersey Outstanding Dance Teacher of the Year, Ms. Muller was teaching an enthusiastic group of students – “not unlike the group I have now,” she added – when she was caught, in a teacherly moment, by a pleasant surprise. “I used to put the music on right at the beginning of the period,” she recounted, “and when I’d walk into the gym, they’d [already] be dancing.”

Grasping these students’ genuine excitement for the class, Ms. Muller jokingly suggested that she throw a dance competition. Fortunately for us, they missed the joke, and soon enough, one student approached Ms. Muller to inquire about details. Within a week, there were 72 students signed up – plus 36 paper stars tacked onto the bulletin board outside the gym. And so commenced the inaugural Dancing with the Stars.

They flailed about with crooked spines, palms slick with sweat. It was careful, the way they swayed – reluctant, their handholding. But shyly, as one dips her toes into cold water, one person began to shimmy. With that, the tension broke and everyone followed suit, yielding with great gusto to the rhythm.

On Thursday, January 31, the Dancing with the Stars assembly, an event directed annually by Ms. Muller, brought together juniors and seniors in the gymnasium for a masterclass in dance. In past years, participation was a more exclusive matter – seniors and seniors only could sign up – but this year, Ms. Muller expanded the Social Dance class to make it accessible to students of other grade levels.

Ms. Muller invited four highly-accomplished professionals in the world of dance: Anna Belyavtseva, Jean Michel Erole, Anna Demidova, and Andrey Begunov. One had, for two consecutive years, earned the title of US Youth Champion. Another had worked full-time as an engineer before leaving his job to teach mambo. Three hailed from far-flung corners of the world. And even as they’d taken diverse life and career paths, these pros performed in wholly different genres – mambo, foxtrot, and swing, among others – but undoubtedly, the four were united under a common passion: sharing dance with others.

After the experts demonstrated their preferred dances, whirling across the hardwood as if on ice, it was time for students to take their turn. Those participating in the upcoming Dancing with the Stars event (April 5) were ushered into an inner room for a more focused lesson. The rest were split off into two sections, and Belyavtseva, Erole, Demidova, and Begunov rotated between the groups to teach.

Senior Brinly Black particularly enjoyed what the professional dancers shared about their experiences: “[It was] amazing… when they were talking about themselves and how they were committed to dance – and that they were there that day to dance with us [shows] they love it so much that they felt like they needed to bring it to our school and teach it to us.”

Kate Klein, another senior and a participant in the upcoming DWTS, offered some exclusive information on what went on inside the back room of the gym: “We learned new spins and specific footwork that would help us hopefully look close to as professional as the dancers that were brought in.”

The DWTS assembly was a relief amidst the cold weather and a welcome change of pace at the tail-end of a heavy month, but above all, it was an inspiring expression of passion, talent, and learning. Moreover, it was just one in a chain of exciting events leading up to that great triumph of April.

For over half a decade, Mr. Egorow, a teacher of World History 9 in Cresskill High School and Project Citizen and American History in Cresskill Middle School, has served as a judge at DWTS. But a little-known fact about Mr. Egorow is that he was actually a part of the first cohort of DWTS dancers. As a student at CHS, year after year, he was drawn back to Ms. Muller’s class.

“I took it every time it was offered,” he recounted, “[because] I really enjoyed Mrs. Muller’s teaching and [how she was] teaching something a little different in gym class from your typical study [of sports].”

“[When you’re] around Ms. Muller,” he added, “you realize just how enthusiastic she is – and particularly about dance,” Mr. Egorow said. “She truly loves it, and…it’s conveyed in just the way she teaches you. She’s so enthusiastic about it that you almost can’t help but get excited about what she’s teaching and talking about.”

Klein felt similarly about the contagious nature of Ms. Muller’s enthusiasm. When asked about her experience so far, she said she found Ms. Muller’s passion particularly inspirational.

“She just has so much passion behind this whole unit and showcasing her students’ skills,” Klein said, “and it rubs off on everyone.” When asked for specifics as to Ms. Muller’s way of teaching, Klein said, “I think her passion just radiates to everyone who is in her presence when she talks about dancing and specifically Dancing with the Stars…[it] makes you want to try your hardest and really perfect the steps.”

As a result, Klein feels thoroughly prepared for April after taking Social Dance this year, which equipped her with a familiarity with “many different dances, and… a good arsenal of moves to go along with each of them.”

Although she has devoted much time to practicing for DWTS – she and her partner have been making full use of “extra help lessons [offered by Ms. Muller] to refresh [their] memories” – Klein balances this commitment with a dose of good humor: “I know everyone is [bound to] mess up, probably many times, so I think it’ll be funny to see everyone try to perform the best they can… This isn’t really an experience you can have anywhere else.”

Through the medium of a grainy photo, the first DWTS event was a swirl of arresting colors and lights.

Reminiscing on that night, Mr. Egorow admitted, “I was really nervous going into it — [with] not knowing what we were going to do, and how big the audience was, [but] the one thing I really remember the most out of it is that [Ms. Muller] invited the senior citizens from the senior center that night, and, during a break in the show, all of the dancers went and grabbed one of the senior citizens to dance with them. As nervous as I was, it turned out to be really fun.”

Each couple danced one slow dance and one fast dance, Mr. Roth emceed, and Ms. Muller brought in several professional dancers, not unlike those who came in during January’s assembly, to perform.

Needless to say, the event was a resounding success – yet, Ms. Muller reveals amid our interview, while flipping through a neat stack of old dance pictures, that at the time, she’d been certain this first Dancing with the Stars would be the last of its kind. From time to time, she raises a photo to the dim light of her office and points out past students, each decked out in glitter and chiffon, grinning ear-to-ear.

Her eyes twinkle with that knowing glimmer.