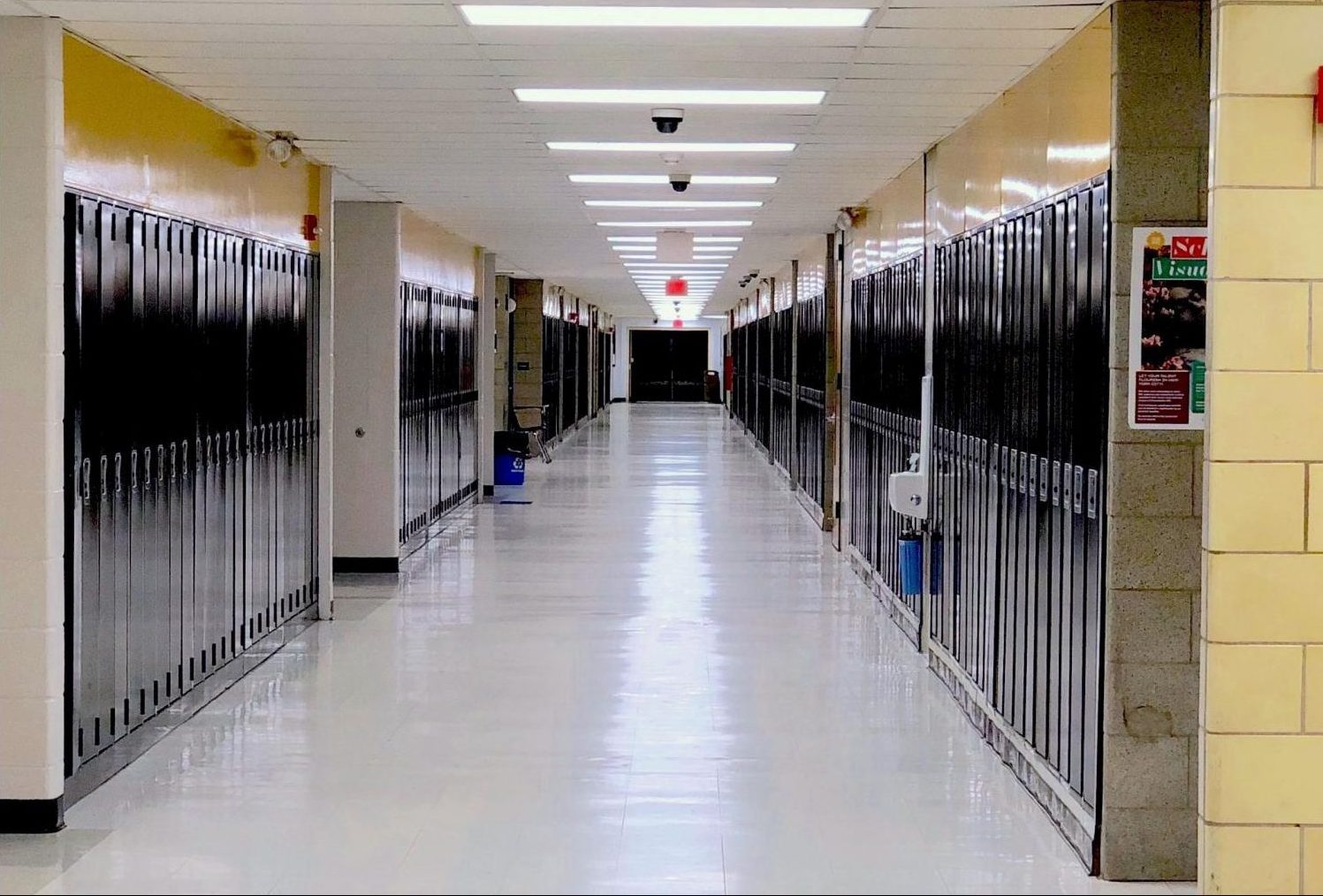 The C wing in March 2020, shortly after the state-issued two-week closure order.

Seniors in Quarantine: Searching for Closure

Far in the past are those first cancellations—chalked up to shadowy abundances of concern—which had at one time seemed overanxious. Murphy’s calling off of in-school classes for what remains of the academic year spells the loss of certain milestones—among these prom, awards banquets, and graduation—that have traditionally afforded symbolic closure to four years of high school.

Conventionally senior-focused events that have fallen to the pandemic include Dancing with the Stars, the spring concert, varsity debate invitationals, Cabaret Night (which coincides with the Tri-M Music Honor Society induction ceremony), the senior athletic awards banquet, senior prom, the senior scholastic awards ceremony, the senior scholarship assembly, and graduation.

Such rites of passage as prom and graduation will be particularly missed. Official communication from the school administration concerning the fate of prom has yet to be issued, but students have been bracing themselves for a cancellation in the cards.

“Personally I feel it is just a shame and a waste to all the seniors who worked hard in high school to get to their prom and graduation,” says Eugene Moon (‘20), the co-vice president of the student organization. “It is such a downer and just annoying to know that these once in a lifetime experiences are no longer available to us.”

“It is upsetting to think that our senior prom may be cancelled,” says Jaclyn Chamberlain (‘20), “because all the work of organizing and fundraising the event was extensive. After buying my dress [and] scheduling my hair and makeup appointments, having the fear that I may not be able to get dressed up is very upsetting. Since seeing all the fun past years have had at their senior prom, it has been a moment in time that I have been waiting for for a long time.”

However, Eugene and Jaclyn hold fast to a measure of optimism.

“I do know that as a member of the class of 2020, we will get through these hard times and persevere,” Eugene asserts.

“I hope that if we cannot successfully have the prom that we have planned,” adds Jaclyn, “that we can figure out another way for us to all be together before we have to graduate and say our goodbyes.” 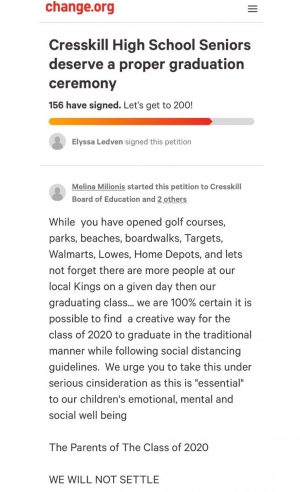 In light of the uncertainty around a graduation ceremony, some CHS parents have taken matters into their own hands. On Thursday, May 14, a group of parents—spearheaded by Melina Milionis—initiated a change.org petition addressed to the Borough of Cresskill, Governor Murphy, and the Board of Education. Citing the reopening of parks and beaches among other public sites that have seen substantial gatherings of people, it demands a “creative way for the [Class of 2020] to graduate in the traditional manner” while simultaneously “following social distancing guidelines.” As of May 17, it bears 156 signatures.

“We urge you to take this under serious [consideration] as this is ‘essential’ to our children’s emotional, mental and social [wellbeing],” the petition concludes.

There have been, to be sure, school-led initiatives implemented with the intent of honoring seniors, if only in a nontraditional sense. The circumstances have required innovation and a good deal of technology: for one, every Friday, as a tribute to the senior class, the lights at Arch Shaw Field are to shine for twenty minutes and twenty seconds at 8:20 PM (20:20 in military time). The Cresskill Music Department has launched a virtual concert series, updated at 7PM on Fridays, featuring performances by members of the Cresskill community ranging from current students to local professional musicians. And in belated observance of Decision Day, Guidance is arranging for seniors’ post-graduation plans to be celebrated over a large-scale Zoom event.

But beyond missing out on particular milestones, students have been disheartened by the wholesale loss of senior year’s social experience, which, particularly in the laxer final semester, would now be at full tilt.

“Not seeing my friends and hanging out with our classmates has been frustrating,” says Aiden Feulner (‘20), “since this is supposed to be such a fun time.”

“Missing my friends and teachers has probably been the most difficult part through this transition,” Jaclyn adds. “Being a senior should be the most exciting time in your life because they are the last times you will see some of your friends before graduating, so not being able to see them is definitely upsetting.”

The future also poses several anxieties for the graduating class.

College-bound or not, seniors face a precarious road ahead. As uncertainty surrounds the prospect of reopening campuses for the fall semester, students are having second thoughts on their places in the class of 2024, some contemplating delaying enrollment until things clear up—particularly for colleges that have not altered tuition costs in accordance with the transition to virtual learning. The havoc of unemployment (whose rates have reached the likes of the Great Depression) plants a glaring question mark over those who planned to dive into the job market.

These casualties are by no means exhaustive—in personal lives, too, students have surely been forced to reckon with some unceremonious ends: a sudden curtain to an internship. A volunteering career cut short. The deprivation, indefinitely, of a loved one who lives painfully afar.

But in spite of it all, some seniors temper their frustration with a ration of hope.

In particular, Aiden aspires “to become more appreciative of our health, and keep in mind that [the quarantine is] for the benefit of those most at risk from the virus.”

The quarantine has also imparted several meaningful lessons for Jaclyn—namely, “the importance of following regulations and being mindful that even though as seniors we may not be affected directly [by] the virus, that we may be carriers of it.”

“Although this time has been very challenging, going from seeing the people we love everyday to only being able to talk to them through the screen on your computer,” Jaclyn reflects, “it is important to do our part to help the community for the benefit of others.”