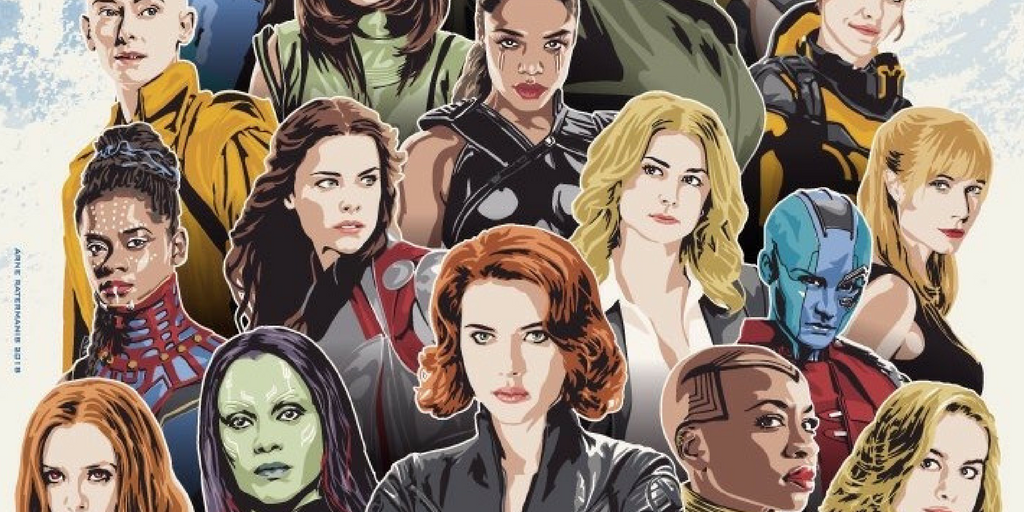 Avenging the Women in the Marvel Cinematic Universe

A superhero’s costume defines them. Captain America is known for his iconic stars and stripes. The Winter Soldier is immediately recognized by his black mask and silver arm. While one aspect of a superhero’s suit is the cool factor, practicality is a very important component– as they are fighting the strongest villains in the universe. However, many of the female characters are depicted in incredibly sexual suits that are completely unrealistic. In no universe would it be realistic for a woman to be placed in a dangerous world-threatening situation and proceed to think to herself  “yes, a skin-tight leotard and heels are my best bet.”

Natasha Romanoff, also known by her superhero name as Black Widow, was the first female superhero brought into the Marvel Cinematic Universe. She was introduced in 2010 in Iron Man 2 and was a part of the original Avengers team from 2012. In those eleven years Marvel has done her character absolutely no justice. From her very first appearance she was sexualized. Tony Stark (Iron Man) was seen looking at a picture of her posing sexually in lingerie during her first appearance. For the rest of the movie Nat wore a skin tight costume, with the zipper pulled down to expose her breasts, high heels, and her hair down. Now maybe it’s just me, but if I am showing up to a fight I might tie my hair up, wear shoes I could run in, and cover up a little better with some real protective armor. However, Marvel clearly did not have the same thought process as I did as they continued this trend of impractical costumes for women for years to come. The comparison between the costumes Black Widow wore with male directors vs a female director is truly showing.

In six out of seven of these suits, the zipper was pulled down. In six out of seven of these suits, Natasha’s hair was down. In all of these suits she wore heels. And in all of these suits women everywhere were disappointed. There was no need for Nat’s breasts to be exposed in her suits that were not intended as fashion statements but made for fighting. While there is a bit more cover in the Infinity War suit it is still unzipped! It’s difficult to wash your face with hair down let alone do the type of combat that Black Widow does. Any person with long hair can understand how inconvenient this styling is. Lastly, the heels, those damn heels. Some argue that the reason Black Widow wears heels is because the actress that plays her, Scarlet Johanssen, is very short. Now I cannot speak for every woman, but I would much rather see a short woman than one unrealistically fighting in heels. Now examine the suit she wears in the upcoming Black Widow film.

Black Widow is directed by a woman named Cate Shortland, and it shows. Finally, her breasts are not put on display. Her hair is tied back. Since the movie has not been released yet, and the title on the poster covers Nat’s feet, we cannot see her shoes. Regardless, this is already such a huge step.

Wanda Maximoff, known by her alias the Scarlet Witch, was introduced to the MCU in Avengers: Age of Ultron. Similar to Black Widow’s unnecessarily revealing suits, Wanda wore a low cut dress. Yes, I said a dress. Oh, and heels, multiple heavy necklaces, and her long hair down. Impractical you would think, well Marvel didn’t. In Avengers: Civil War and “Avengers: Infinity War” Wanda continued to wear her hair down and heels, but this time instead of a low cut dress she wore a low cut corset. Corsets are extremely restricting and uncomfortable which is why women got rid of them starting in 1914! Corsets are physically limiting enough to people just sitting down. Now imagine fighting a war in one– because that’s what the Scarlet Witch was doing. In an interview with Elle the actress who plays Wanda, Elizabeth Olsen, spoke on how uncomfortable she was with the corset. She particularly expressed her concern about the extreme amount of cleavage in the costume.

Gamora was introduced in The Guardians of the Galaxy in 2014. Even though she does hand-to-hand combat they dressed her in a revealing outfit leaving her vulnerable. By now you may be starting to see a pattern– her hair is down, breasts exposed, and little to no protective armor. She is the most skilled assassin in the galaxy, she deserves an appropriate suit for her position.

Just Here for the Plot

Marvel favors men’s storylines over women’s– plain and simple. Throughout all of the films in the Marvel Cinematic Universe it becomes incredibly clear that women are cast aside for their male counterparts. Black Widow, also known as Natasha Romanoff, played by Scarlett Johansson, had to take part in arguably one of the worst scenes in all of Marvel Cinematic history. In “Avengers: Age of Ultron”, directed by Joss Whedon, Natasha reveals to Bruce Banner, The Hulk, played by Mark Ruffalo, that she is infertile. She proceeded to label herself a monster because of her inability to carry children. It is disgusting and beyond disrespectful to imply that sterile women are inhumane or monstrous. The connection between Nat’s inability to be with child and Bruce’s power to turn into a large, green, aggressive creature is incomparable and offensive. Watching Natasha’s self-sacrificial death in “Avengers: Endgame” knowing that she is unable to produce children makes the scene that much more difficult to tolerate. It makes sense that Natasha would want to die over Clint because he has a wife and kids, but that subtly implies that because of Natasha’s lack of family, because of her infertility it makes her more disposable. For centuries women were only valued by their reproductive status, but come on, it is the 21st century we should be past this.

On the subject of Black Widow’s death it is appalling to see the lack of respect for her. While Tony Stark, who also died in “Avengers: Endgame”, received a funeral attended by every single superhero in the MCU, multiple documentaries made about him (seen in “Spider-Man: Far From Home”) , and a lot of screen time attention, Black Widow got little to nothing. There was no funeral, barely a mention of her name after her death. For a character who has been around almost as long as Tony it is completely unfair that her death was cast aside. Both Tony and Natasha killed themselves to save everybody else, yet only Tony was honored for it.

You may be thinking that the directors of Marvel couldn’t have possibly continued to do Black Widow so wrong after dressing her in oversexualized costumes for years, labeling her as a monster because of her infertility, and not honoring her death– but indeed they did. Her character was a part of the original Avengers team since 2012 and she is still yet to have her own solo movie. It has been eleven years. Eleven years and her movie still hasn’t been released. Black Widow should have had her own film years ago when Iron Man had his own films, Thor had his own films, and Captain America had his own films. But no. Marvel thought it would be better if she was thrown into the group movies as their token woman. Until 2019 with the release of Captain Marvel there has been no solo female superhero for little girls to look up to, and that is truly shameful.

It is absolutely repugnant for women to still be illustrated as damsels in need of saving in the 21th century. This is the archaic trope that Marvel went with in Iron Man 3. Tony Stark’s love interest, Pepper Potts, was kidnapped and tortured by Iron Man’s enemy. Women had to sit in their seats and watch their only form of representation in the movie helplessly struggle and be tortured in a bra. We do not need to be damsels in distress. We do not need to be saved. For once I would like to see a female love interest not used as a tool to motivate their male counterparts!. Or better yet, I would love to see a woman save her male romantic partner!.

Marvel clearly loves this plot as they used it again in Avengers: Age of Ultron. The villain, Ultron, locks Black Widow up behind bars and surprise surprise a man comes to her rescue, Bruce– her love interest. Natasha is a strong, intelligent, experienced assassin; she does not need to be saved. The scene was completely unnecessary and insulting.

In “Guardians of the Galaxy Vol. 1” Gamora’s, played by Zoё Saldaña, storyline mostly revolved around Peter Quill, her love interest. While initially her purpose was to retrieve a powerful entity known as an infinity stone, by the end she was sacrificing her life for Peter. Now this is a nice arc; she became warmer to other people. However, in “Guardians of the Galaxy Vol. 2” Gamora’s storyline once again revolved around Peter and now his father as well. Gamora, along with the rest of the group, followed Peter to his father’s planet and essentially sat around for much of the movie while Peter learned about his family. In “Avengers: Infinity War” her plot was based on her father, Thanos, who was the main villain. In this movie the disposable woman trope continued when she was killed to further the plot. Gamora had the potential to be a really great character, but Marvel wasted the opportunity.

Margaret Elizabeth “Peggy” Carter’s, played by Hayley Atwell, first appearance was in “Captain America: The First Avenger”. Peggy was an Operations Supervisor for the Strategic Scientific Reserve in the 1940s. She met Steve Rogers, Captain America, played by Chris Evans, during his military training. They grew fond of each other in a short period of time, but their time was cut off when Steve was kept in ice for 70 years as she lived her normal life. In “Avengers: Endgame” when Steve came back from returning the infinity stones to their respective locations we found out that Rogers decided to live out his life from the 40s as he would have done had he not been put in the ice. It is indicated that he spent that life with Peggy as the ending scene captures the two of them dancing together. While Steve and Peggy finally getting to have their long awaited dance is very satisfying, Marvel completely disregarded Peggy’s entire life. In the Marvel series “Agent Carter” based around Peggy’s time in the 40s she moves on, gets married to another man, and has children. She had a happy life. However, her storyline was regarded as not as important as Steve getting to be with the woman he kissed once 70 years ago.

Marvel constantly casts women aside to shine a light on their male counterparts. We have to sit in the shadows while they get to bask in the glory of the front of the poster. Marvel needs to catch up because it is 2021 and we will not accept this anymore.