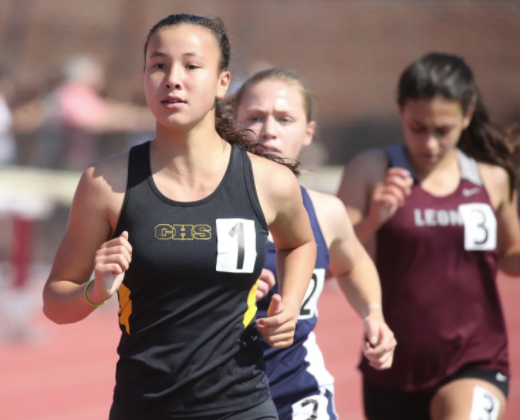 Cresskill has a history of great track and field athletes. The newest one is sophomore Danielle Tilp. Inspired by her dad, Danielle has been running for the past 9 years and even qualified for the Junior Olympics in 2015.

In the 2020-2021 track and field season, Danielle has made Cresskill History. She started off strong, in her very first meet she was awarded with a black shirt in the 1600m, meaning her times are as competitive at the state level.

In every meet she participates in, Danielle goes above and beyond. In the County Championships, she got second place on an all time record chart for the 800m with a 2:21.74.

Cresskill’s very own track and field coach, Coach Woodford, shared his thoughts on Danielle’s success. As his team’s leading point scorer he says that she is “ humongous in terms of points”. He also went on to say that she is “determined and tough” and “quiet but still knows what she can do”

When asked what she contributes to the team he stated that she is “always positive”. According to Coach Woodford, she is a valued member of the team because “she makes everyone better”.

On and off the track, Danielle is an admired member of the Cresskill community. She is well-respected by her family, friends, and classmates.

When asked to describe what kind of person Danielle is, sophomore Seojin Park stated, “She is really hard working, before meets she’ll tell me she doesn’t think could do it this time, but she still manages to do it”

Seojin also went on to say, “I’m really proud of her because she works extremely hard and also stays on top of all her classes”

Keira Kelly has known Danielle since elementary school. She says that she is “super supportive of her friends” and that she “compliments us all the time and always listens when we need to rant.”

It is clear that Danielle has a bright future ahead of her.

When asked about her future plans, Danielle stated, “I will most likely try to get a scholarship for track in a good academic college”. She also said she, “[does not] plan on making a career out of running but since [she] loves sports so much a career around athletics sounds fitting and fun”

That’s not all, this weekend Danielle also qualified for states for each event she ran: the 1600m, 3200m, and 800m! While she is confident in her chances of doing well in the 1600m, she is narrowing down which other event to participate in, deciding between the 800m and 3200m. Whichever one she decides to do, she has support from the entire Cresskill community on her side. Good luck Danielle!