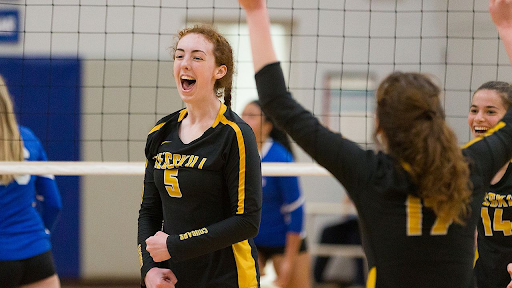 Niamh Tobin picks up her phone to see she is getting a call from her volleyball coach, Ms. Durakis. “Hey coach, what’s up?” Niamh says.

Athlete of the Week is an award that is given to one boy and one girl every week. These two people are chosen out of all of North Jersey so it is a huge honor to be given it. “I knew that I could get it, But I wasn’t totally confident in the idea of actually winning because I know how many people in our league were nominated and comparing myself to them I guess I didn’t know if I’d get it over them,” says Tobin.

Niamh Tobin is very active in the Cresskill sports community, playing varsity volleyball, basketball, and softball. Her award was given to her for her performance in volleyball. The Cresskill girls volleyball team, coached by Ms. Durakis is 7-0 and Niamh is a huge part of the team’s success so far. She is the leader in kills and blocks with 35 kills and 17 blocks so far this season. Niamh hopes to improve her stats greatly throughout the season and hopefully lead the team to success in the state tournament.

Tobin hopes to continue her volleyball career in the future. “I hope to be playing volleyball at the collegiate level, but if I can’t get a scholarship I will for sure be playing on a club team at whatever school I end up at,” Niamh says.

Once the school building opens up again you will be able to see Niamh’s portrait hanging up in the gym lobby. Be sure to take a look!